Atiu - The Island of Insects and Birds

A RAISED volcanic island in the Cook Islands southern group, Atiu is surrounded by a reef from which rise six-metre cliffs of fossilised coral -- makatea -- which form a mile-wide ring around the island, virtually a plateau. Erosion at the inner side of the ring has formed a dip of some 30 metres into fertile land which gradually rises again to a central flat-topped hill about 230 feet (70 m) above sea level where most human habitation is concentrated. The island stands some 14,500 feet (4500 m) above the ocean floor. Population is currently about 600.

Atiuans trace their ancestry from Tangaroa, the principal god of Atiu and universally recognised in Polynesia as tutelary God of the Sea.

Atiu's area is about half that of Rarotonga. The low swampy land consists of taro plantations, marshes and a lake, Te Roto. This fertile area also grows bananas, citrus fruits, pawpaws, breadfruit and coconuts. The ancient name of the island was Enuamanu, meaning the island of insects and animals, although there is some dispute over whether 'animals' includes 'insects'. The Atiuans understand it as meaning there were no previous inhabitants. The Atiuans call themselves 'worms of Enuamanu' because they were born on Atiu and hope to be buried there. There was once a custom on Atiu similar to that of New Zealand Maori of burying a newborn child's placenta under a newly planted tree. This is the origin of the Atiuan saying: "We come from the land and go back to the land." The Atiuans were a fierce, warrior people and before the arrival of the missionaries busied themselves with making war on their neighbors on Mauke and Mitiaro, slaughtering and eating significant numbers of them.
Captain Cook sighted the island on March 31 1777 and made tentative contact with some of the people over the next few days. In common with most islands in the southern group, Atiu has only a small, shallow lagoon. 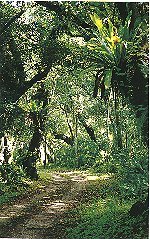 It compensates, however, with many picturesque, sandy beaches. As is usual with the makatea islands of the southern group, the fossilised coral limestone abounds with caves filled with stalactites and stalagmites. One in particular, the Anatakitaki Cave, is inhabited by tiny kopeka birds which navigate in the dark using sonar, like bats. Male visitors can enjoy the esoteric delights of the "tumunu" or bush beer party.
Technically illegal and banned ever since the missionaries descended on these beautiful islands, the tumunu is a hangover (in more senses than one) from the old-time kava ceremonies so detested by the missionaries. However, they have survived and "invitations" can be arranged for visiting enthusiasts. See More on Aitu.

Atiu is a great place for active travellers and holidaymakers who enjoy scenery and walking. Would-be visitors should see Atiu -- The Warriors Island. Air access is by Air Rarotonga which flies regularly from Rarotonga.